Its that time of the week again, here are some snapshots of skies that were enjoyed by Regina residents over the past week. (Skywatch Friday)

The first photo is one of Regina's most recognizable landmarks, the McCallum Hill twin office towers in downtown Regina. This late evening photo was taken in minus 30C degree temperatures, but I think it was worth it. 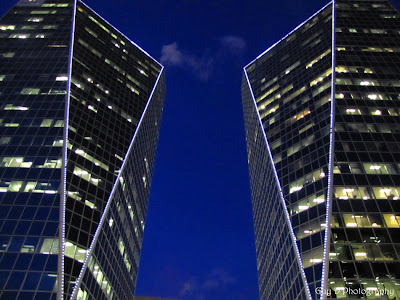 The second photo is a sunset that I was able to catch while on my way to do some Christmas shopping. One thing about Regina's winters, our skies are just as stunning as they are during the warmer months. 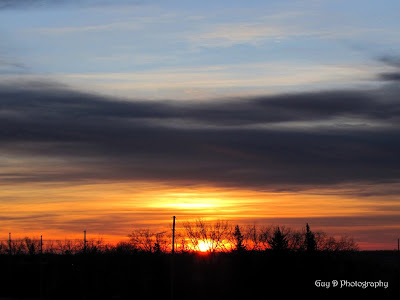 The last photo was also taken in arctic like temperatures. This was taken from the north shore of the frozen Wascana Lake facing southward towards the Saskatchewan Legislative Building. Yes it's as cold as it looks..lol. 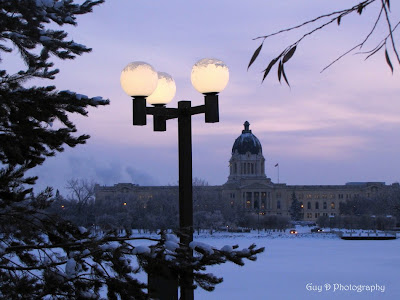 (click on photo to enlarge)
Be sure to check out other 'Skywatch Friday' posts from around the world at: http://skyley.blogspot.com/
Posted by Guy D at Thursday, December 10, 2009

Wonderful photo´s!Thank you for sharing and have a nice weekend!

These are all great shtos. I love that brilliant blue sky in the first one and the way it was shot through the building.

What fantastic captures as always, Guy! Love the deep blue in the first shot, the brilliant colors in the second and a beautiful reminder in the third as to just how cold it is!!!

Have a wonderful weekend and stay warm!

Great photos from you. I like the first one best, stunning. Have a nice weekend.

Your skies are gorgeous, Guy...but the temperature on the Prairies lately has been freezing! Good for you for braving the cold and getting out to do some Christmas shopping.

That first photo is stunning. I really like how you framed the shot, the lighting is wonderful.

The first picture was extra beautiful, wow ... Beautiful pictures you share with us. Have a nice Skywatch:)

As always, I love your winter skies, they're like nothing I have seen first hand.

Those are some really beautiful shots Guy, minus 30 phew that's a bit too cold-love seeing proper snow though-and I don't doubt that you get some great skies all year around. Thanks for sharing:)

oh i'm so glad you showed more than one photo of your beautiful city's skies. minus 30, now that is crazy cold.

Wow, super nice! Love that deep blue...knocked my socks off.

Great photos Guy. With those temperatures you can't even leave the Canadian Ale on the back porch LOL

WOW! I like all three pictures.
I love the perspective and colours, fantastic!

Have a nice weekend.
Gunilla in Sweden

Definitely worth it Guy! That is an awesome blue in the first picture.

I hope your city realizes how lucky they are. I love they way you are so proud of your city and how you display it to the world. My husband and I were in Regina this past summer because I was taken aback by how beautiful it looks in your photos, and i have to say it really is a wonderful city. Thanks again Guy and keep up the great work for Regina.

Stunning shots. That is a much larger city than I thought.

I love seeing the variety of blues, and other colours, of the skies!!!

Great collection, as always, but that first shot... WOW! Definitely worth freezing your tootie off. Awesome!

It's great to be back! And photos like those make it even better.

It looks like lighted icicles on the twin towers there! Brrr! I can FEEL the cold! I think I will go brew another cup of tea!

A nice mix of lovely photos. HAve a nice weekend.

Guy, your header is a shock, I keep forgetting that there has been blue sky and sun and warm temps.

So nice to see your photos! Still having a snow dump in My Muskoka !

I heard about your freezing temps; they are headed our way tomorrow. darn!

Awesome pictures in spite of the cold!

Great pictures. I am surprised there isn't more noise. That is what happens with my camera when it is that cold.

Fantastic images, Guy! You sure do get cold weather, but also beautiful skies!

Nice selection of your local skies. Thank for leaving your comment on the 'Reflection'. Cheers FAB.

I cannot imagine that I would be as "brave" as to go out for a photo shoot when it is 30 below!!

Did I tell you that here in Sydney we have just finished our first week of summer?

Good selection of skies this week.

what a fantastic city sky, and the snow picture is great too!!! We had quite a bit of snow in New York too!

Guy, they are all wonderful photos. The first one I said WOW, just gorgeous evening shot, the second one the colors are just amazing and the last is a beautiful scene. Well done!

You really DO live in one of the most picturesque places on earth. Your pics are always lovely!

Three wonderful shots and indeed the skies are just as interesting in the winter. Have a great weekend.

Great shots, I LOVE the first one! It sure is cold out your way though, brr!!!

Wonderful shots. I love the sunset the most.

All great shots but I really love that first shot.

It is always a delight to visit your blog with these lovely photos!

These are neat. You always learn me something!

Thank you for the holiday joy.

It does look cold. And, I don't have to experience it vicariously anymore, since Toronto has finally been immersed in a deep freeze of sorts. Yikes - what a change from the warm temps of November.

Thanks for visiting my site. I have not been to Regina, but enjoy looking at your shots.

This Is My Blog - fishing guy said...

-30??? OMG, that is too cold for me. I am so glad you continue to brave the elements to bring us these awesome photos.

I love the first one, it is beautiful.

Always fantastic as these are but that second one is stunning!
Thanks for braving the temps to bring us such beautiful scenes.

Great shots, i like the first one more, it has a great frame. Thank you for your comments, have a nice SWF

I really, really, like those two towers and the way the sky looks between and reflected in them.
And in the last shot, even the lamp posts look cold!

Lovely series...I hear it's bitterly cold where you are! I don't think I'd have clothes warm enough to survive in sub zero temps. Stay warm. I guess you won't be shooting much outdoors!

Brrrrrrrrrr! It's getting that way here now as well. Have a great week, Guy. Elaine

Great pics Guy. Somebody should invite Al Gore to your neck of the woods. :)

Guy D
Regina, Saskatchewan, Canada
Greetings, as a longtime citizen of the Capital City of Regina, Saskatchewan, Canada, I thought I would start a photo blog displaying my love of photography and incorporate it with my favourite city. Hope you all enjoy my photos (I'll try to add at least one per day) and feel free to submit some requests or comments. Note...all photographs are property of the owner of this blog and can only be used or copied with permission. Thanks!

Archives of 'Regina in Pictures'

Followers Of My Blog

I'd like to invite everyone to join my new 'Regina In Pictures' Facebook group. Feel free to invite all your friends whom you'd think would be interested in joining. Thanks so much! 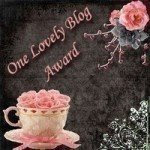 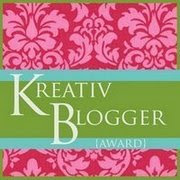